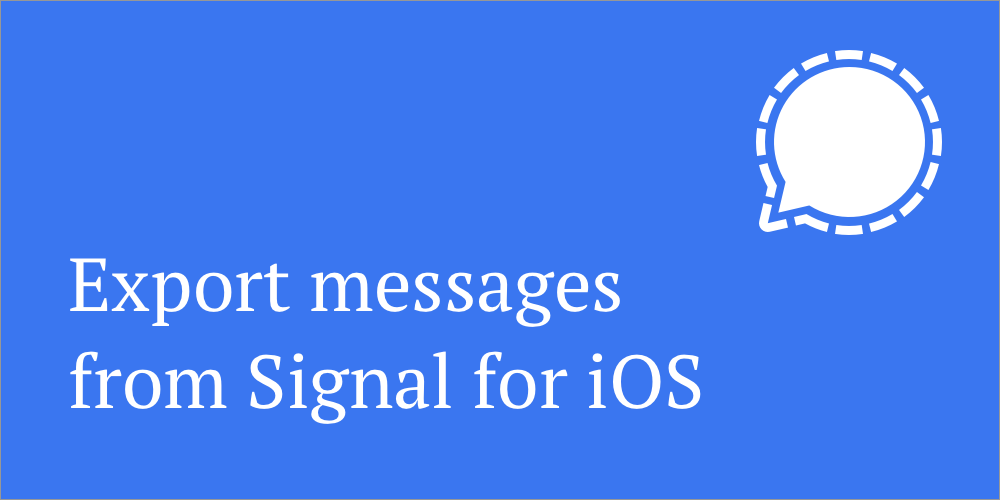 I started using Signal 5 years ago as I became increasingly conscious of my data footprint. Around the same time, I closed my Facebook and Instagram accounts, and later, my Google Account.

The problem with Signal

Signal makes it very difficult, and in most cases, impossible, for one to back up, export, or migrate message data. The Signal team insists these restrictions are meant to protect users’ privacy. However, backup and migration policies differ for each official Signal client and sometimes contradict each other.

For example, while iOS offers no official backups process, Android backups are built into the app. At the same time, iOS users can migrate their data to a new device (as long as their phone number hasn’t changed), but this is impossible on Android. Meanwhile, decrypting messages from the desktop client is trivial, but linking one’s phone and desktop client only syncs messages forward in time.

Because it’s my fucking data.

The road to exporting my data was long, frustrating and filled with dead ends – it took over a year to get here. What's paradoxical is that someone else's phone turned out to be the key to my data.

In recent years, I moved most of my conversations to Signal, including those with family and close friends. Shortly after we started dating, I asked my partner to switch to Signal, and we’ve used it exclusively ever since. At some point, I thought it would be nice to export our conversation history – a sort of time capsule of our relationship. “Easy,” I thought. I was wrong.

Since we started dating, I had switched from a OnePlus 2 to an iPhone XS Max. And since migrating from Android to iOS isn’t possible, part of our conversation history was locked on my old phone. Jailbreaking the iPhone was out of the question since my version of iOS had not been jailbreaken. The Signal Desktop client could have offered an easy avenue to decrypt our chat history, but there was a period of several months during which I had not linked my iPhone to the Signal desktop client.

I opened a thread about this in the Signal Community Forum in June of 2019. It quickly became apparent that backing up my Signal data would be an uphill battle.

Luckily, my partner had an iPhone 7, which she recently replaced with a company phone. Her old iPhone contained our entire message history in one place and was easy to jailbreak. Jackpot.

One important lesson I learned during this process: to ensure access to your conversation history, install the Desktop client and link it to your mobile device as soon as you start using Signal. The Signal database and encryption key are both accessible on your computer, allowing for easy decryption. Linking the desktop client later will only sync messages forward in time from the moment the devices are linked.

Tips to increase your chances of exporting your Signal database

If you haven’t linked the desktop client and extracting the iOS database is your only option, this guide is for you. If you've decided to embark upon this journey, here's some advice.

Your best chance of jailbreaking iOS is on older firmware versions. Turn off automatic updates and decline prompts to update iOS.

SHSH blobs are the digital signatures that Apple generates and uses to personalize iOS firmware files for each iOS device. Apple only signs firmware updates for a limited time after release. Having these signatures handy allows one to install versions of iOS after Apple stops signing them – like when a jailbreak becomes available for that version. In some cases, you may be able to downgrade iOS to a previous version.

Learn about jailbreaking and stay up to date on developments

Developers and hackers are constantly working to break the security of iOS, and new methods to jailbreak iPhones are frequently made public. Stay informed on jailbreak releases by following the /r/jailbreak subreddit.

This exhaustive list of jailbreak compatibility by device and iOS version is also a great resource.

Recognize that this may not work

Depending on your iPhone, you might never be able to jailbreak it or extract Signals decryption key from the iOS Keychain. Apple is making it increasingly difficult to jailbreak iOS devices – improvements to hardware and software are leaving fewer cracks for hackers to exploit.

Ok, let's get our hands dirty.

How to (maybe) backup Signal for iPhone

This guide explains how I was able to backup and extract data from Signal's encrypted SQLite database on an iPhone 7 with iOS 13.6.1.

Shell environments will be differentiated as such.

For iOS 13.6.1 on an iPhone 7, I used checkra1n which offers a straight forward semi-tethered jailbreak. Depending on the iPhone device and version of iOS, a jailbreak may or may not be available.

See this updated list of iOS jailbreaks for device compatibility and instructions.

Step 2: SSH into the iPhone

As always, the root password on iOS is alpine.

If the iPhone and the host machine are on the same network, SSH into the phone using its IP address. It may be found in the phone's WiFi settings.

If SSH over the air isn't possible, USB may be an alternative. However, this involves enabling a proxy service on the host machine.

Then, edit com.usbmux.iproxy.plist and append the following XML to the file.

And finally, launch the proxy on the host machine.

It should now be possible to SSH into the iPhone over USB on port 2222.

Once logged into to the iPhone's shell, install the following packages as they will come in handy.

Much like macOS, iOS stores application data in a Library-like directory. In iOS 13, its located here /private/var/mobile/Containers/Shared/AppGroup/.

Signal's data directory contains the encrypted SQLite database file in ./grdb/signal.sqilte and attachments, such as images and videos in ./Attachments.

The data directory may be found by searching the filesystem for Signal's encrypted database file, signal.sqlite.

That should return something which looks like this:
/private/var/mobile/Containers/Shared/AppGroup/01484069-3446-4CC0-8BE7-7464E7D08FDF/grdb/signal.sqlite

It is recommended to zip the entire directory, not only the database file, as it also contains images and other message attachments. This archive can reach several gigabytes.

Retrieve the backup on the host machine

In a new terminal session on the host machine, use scp to copy the backup.

Once complete, verify that the backup has fully transferred by unpacking it.

This is the most complex part of this operation and it helps to have a basic understanding of core iOS development concepts.

From the Apple Developer Documentation:

An entitlement is a right or privilege that grants an executable particular capabilities. For example, an app needs the HomeKit Entitlement — along with explicit user consent — to access a user’s home automation network. An app stores its entitlements as key-value pairs embedded in the code signature of its binary executable.

We will use Keychain-Dumper to attempt extracting the Signal encryption key. It requires entitlements to access Keychain data for any particular app.

Reading through Keychain-Dumper's GitHub issues, I learned that entitlements changed in iOS 13.5 – prior to this version, an application could be given wildcard entitlements. Changes in 13.5 made it such that apps need specific entitlements. Thankfully, it's possible to update an executable's entitlements, even as a binary.

The keychain_dumper binary included in its GitHub repo has wildcard entitlements. We'll need to update them in order to give it permission to decrypt the Signal key.

Install Keychain Dumper on the iPhone

Back on the iPhone, download and extract the keychain_dumper binary, and move it to /usr/bin.

It's necessary to create a bash script that will look through the apps installed on your phone and give keychain_dumper entitlements to access them. At the time of writing, the updateEntitlements.sh script included in the repo doesn't take into account the changes in iOS 13.5.

Add this script to the file.

Set execution permissions for the script.

The updateEntitlements.sh script makes use of a tool called plutil which isn't installed in iOS by default. Luckily, an iOS compatible version is available in Cydia in the apt.binger.com repository.

Install the plutil package from Cydia and test that it's working on the iPhone.

Next, run the custom updateEntitlements.sh script.

The list of apps installed on the phone appear.

Use the ldid utility to check entitlements were properly set.

This should produce the following output.

For keychain_dumper to work, it needs all three of these entitlements. It will not work if group entitlements are missing.

If all went well, the decrypted Signal private key should appear in hex format.

Your private key, Keychain Data (Hex), should be a 99 byte string starting with 0x. If the keychain data looks like this +62BnrvZ18x\/uyHudKE61i8JfTj8auO5uHm4IyWu1ULMbDOb484S4+AKoq3Oxc3L, that probably means the key was not properly decrypted.

The worst is over. With both the encrypted database file and encryption key in hand, the data may be decrypted. For this, sqlcipher, an SQLite extension that provides encryption for database files, is required.

Back on the host machine, install sqlcipher.

Next, open the database file.

Enter the following commands in the sqlite> prompt, updating with your private key. It's important to remove the characters 0x from the beginning of the private key – this simply serves as an indicator that the key is in hexadecimal format.

If a list of tables appears, congratulations, you've decrypted your Signal database 🎉

Next, let's export a decrypted database to a file.

The decrypted database is now found under signal_decrypted.sqlite.

Messages are stored in the model_TSInteraction table.

In a follow up post, I will explain Signal's database structure and how to export the message history to a usable format.

The following resources helped me through this process, and to write this guide.